Everyone knows about Andrew’s first, and greatest, revelation from God that he received on March 23, 1968. But you might not remember his second greatest revelation. This one took place on January 31, 2002—twenty years ago! At the time, Andrew Wommack Ministries had gotten to a place where it wasn’t a struggle to stay afloat financially, and Andrew had begun to enjoy just coasting.

However, on that day in January, God told Andrew he had limited Him by thinking too small.

Yes, again and again they tempted God, and limited the Holy One of Israel.

This would have been discouraging for many believers to hear. But Andrew realized that God wanted to do more through him than he’d had in mind. He took the message to heart, saying to his staff, “I don’t know how long it takes to change this image on the inside. It may take a week, a month, a year, or ten years—but I will change. I will do what God called me to do.”

Now, you might think he never limited God again. Surely, that was his endeavor. However, in 2014, the Lord spoke to him again that he was still thinking too small! That was when he determined to go for it like never before. To say that this revelation was pivotal for Andrew and his ministry would be a wild understatement.

For our Gospel Truth television broadcasts, we had only 3 percent coverage in the U.S. The bill for each month was $50,000. Now we are worldwide, reaching a potential audience of 3.2 billion people—that is a 1,094 percent increase! And we’re able to produce a program that costs $1.25 million a month, a 2,400 percent increase! As a result of our global reach, the response we receive has increased exponentially. Twenty years ago, we were receiving 24,000 inbound calls annually. Now we are getting 675,000 calls a year! That is a 2,712 percent increase. Speaking of our television program, we were only broadcasting in English, but we are now in 13 languages, an increase of 1,200 percent!

Speaking of our growth overseas, we now have 20 offices, after starting with none twenty years ago. We also have 27 stateside schools, whereas in 2001, we only had one. That’s an increase of 2,600 percent!

Lastly, our assets before Andrew started thinking bigger totaled $1 million. Since that time, the ministry has accumulated $120 million in assets. This is 1,100 percent more, another huge increase. 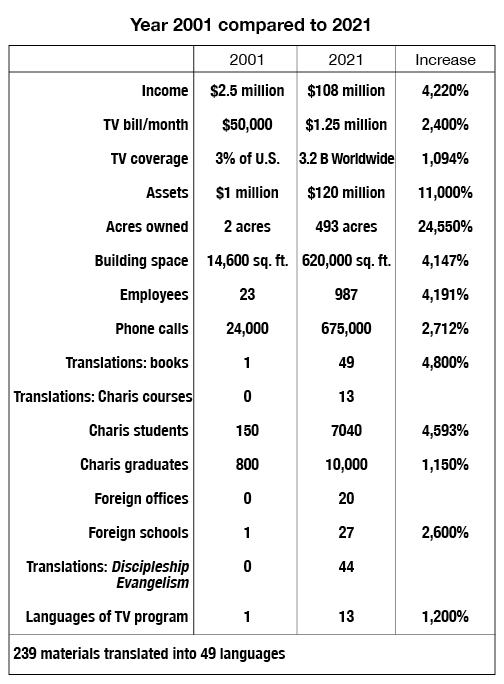 Some may wonder why it’s important to see these numbers. They’re for you!

We need to be able to show you in measurements the lives that have been changed since Andrew stopped limiting God. However, he would be the first to tell you that none of this would have been possible without the faithful support of our partners. Partners, you are the best, and we are thankful for each and every one of you!

Andrew is often asked how exactly he took the limits off God. How did he change the image he had of himself? It all started in his imagination! No, Andrew didn’t resort to something childish or immature. But he knew that if he could see himself the way God saw him, it would directly affect what God could do through him.

Imagination is much more important than you may have ever realized. You use it every day. It’s your ability to see with your heart what you can’t see with your eyes. It’s how you think, how you meditate, how you understand, and how you remember things. You really can’t do anything without an imagination, let alone what God wants you to do.

For example, if you heard someone say “apple,” you wouldn’t see the word spelled out in your mind. You would see the actual fruit. It’s because you think in pictures. That’s how your imagination works! So, when Andrew imagined himself the way God saw him—through the Word—he was set up to start taking the limits off God. Success was soon to follow in every area of his ministry.

In fact, Andrew experienced so much success that he feared it would ruin him. You’re probably asking, “How could that happen?” By losing humility and dependency on God. Andrew had seen success ruin a person’s relationship with Him more often than failure.

And you shall remember the Lord your God, for it is He who gives you power to get wealth, that He may establish His covenant which He swore to your fathers, as it is this day.

So, what did Andrew do? He prayed. As he drew near to the Lord, the Lord told him that he was going to have to trust Him and that success wouldn’t destroy him.

You have an image on the inside of you of who you are and what you can do. That image is actually like a ceiling, or limit, on God’s power and provision in your life. If you knew there were no limits—if money wasn’t a factor, if age didn’t matter, if God gave you supernatural ability—what would you do? If you don’t know, one of the great ways God reveals His will to you is through your desires.

Delight yourself also in the Lord, and He shall give you the desires of your heart.

If you are truly delighting yourself in the Lord, then that desire you have is from the Lord. Go for it. Give God something to work with. Set your hand to something so He can bless it (Deut. 28:8). Start taking steps. Before you know it, you’ll have moved a long way from where you are now and much closer to where God wants you to be. Start seeing yourself the way God sees you, and take the limits off God today!

Shepherding God’s Sheep: The Job of a Pastor